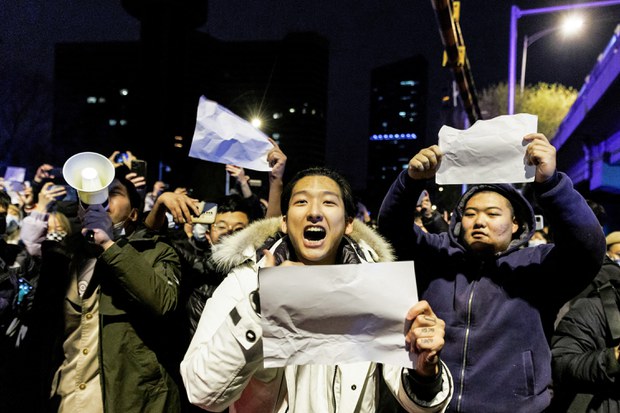 According to an unverified document circulating on social media, officials in major cities were being told to take steps to control the supply of ubiquitous white printer paper, with a major stationery firm suspending online and offline sales.

Compared with the Post-it notes that formed the “Lennon Walls” of Hong Kong’s 2019 protest movement, which showcased huge mosaics of diverse messages and creative personal expression, the blank sheets of paper are a more ironic reference to government controls and censorship, analysts said.

Veteran Taiwan social activist Ho Tsung-hsun said the white paper revolution had quickly spread across the country, indicating it struck a chord with a wide variety of protesters in China.

“Some people pasted blank sheets of paper next to a statue of [late revolutionary Chinese writer] Lu Xu, and under Xi Jinping slogans,” Ho told RFA.

“Some students sang the Internationale in their dorms at night, while others took their guitars to sing it on the streets, with blank sheets of paper pasted next to their guitars,” he added, referring to the communist anthem.

“In Wuzhen, Zhejiang, some young women sealed their mouths shut, handcuffed themselves and held up blank sheets of paper,” he said.

Ho added that people quickly started using other white items following reports that the sale of A4 paper – the typical size of printer paper in China and other countries – was being restricted by the authorities.

“I’m more inclined to call it the white revolution, because people have been very creative about expressing themselves through white objects, since reports emerged online that it was now impossible to buy paper, that sales had been restricted in a lot of places,” he said.

“If they restrict sales of white paper, then other white materials and objects can be used, such as white cloth or white paint,” Ho said.

Some online accounts have started replacing their avatars or profile photos with white backgrounds, while social media users have used the hashtags #whitepaperrevolution and #A4revolution to show support for the protests, alongside selfies holding blank sheets of paper in the streets or posting them anonymously on bulletin boards and in corridors, cafes and parks.

‘We want dignity and freedom’

A news and commentary account that uses the handle @citizensdailycn across several social media platforms including Facebook and Twitter said the white paper movement was “the revolution of our generation.”

“We want to say what they don’t want us to say: We want dignity and freedom,” it said in an apparent rallying call opposing controls on speech and information, as well as the restrictions of the zero-COVID policy.

The Urumqi fire has coincided with a growing realization that the circumstances in China as it relates to COVID restrictions are unusual compared with other countries, according to Zuola.

“Since the start of the World Cup, the Chinese people have been discovering that no other country is taking [the] Omicron [variant of COVID-19] seriously,” Zuola said.

“People are also angry that Sinovac and other [Chinese] vaccine companies won their licenses through bribery, and over the government collusion with business that has made it impossible to roll back pandemic restrictions over the past three years,” he said.

“Then there was the lone protest by Peng Lifa,” he said, in a reference to the Oct. 13 “Bridge Man” protest banners hung from a Beijing traffic flyover. “All of this has been fermenting for some time; it hasn’t happened overnight. There has been a sense of long-running grievance over internet censorship in China, too.”

When the Uyghur residents of the apartment block died in a fire after screaming to be allowed to leave the locked-down building, everyone in China felt their pain, he said.

“They were shouting that they were all from Urumqi, that everyone was a victim of the disease control measures, and that they couldn’t allow those people to be left to die in silence,” he said.

Ho believes there is also a mute reference to ballot papers — meaningless in China, where all “election” candidates must be pre-approved by the government — in the use of sheets of printer paper.

The blankness of the sheets also echoes the lack of clear aim or unified leadership during the weekend’s protests.

“A movement without a leader is what those in power fear the most,” Ho said.