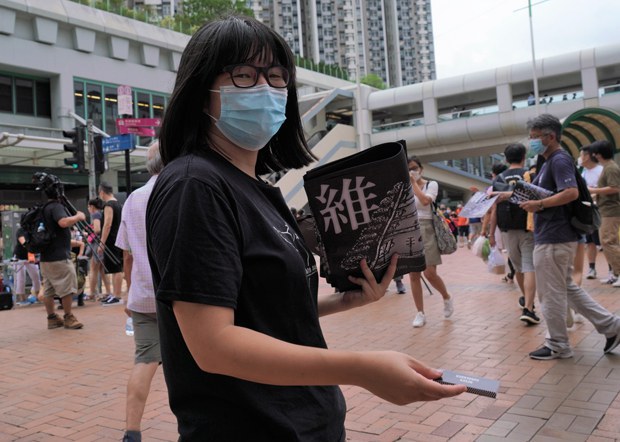 A rights activist in the southern Chinese province of Guangdong has proposed marriage in an open letter to his girlfriend, a Hong Kong rights lawyer and activist who is currently in prison on remand for “inciting” others to commemorate the 1989 Tiananmen massacre.

Ye Du, whose birth name is Wu Wei, proposed to barrister and rights activist Chow Hang-tung, who is accused of “inciting” others to take part in activities commemorating the June 4, 1989 Tiananmen massacre, vowing to wait for her regardless of how long she remained in prison.

“We have never stopped fighting the good fight. We have never turned aside from the path we should take, and we have kept the faith,” Ye wrote in a letter to Chow published in the Ming Pao newspaper.

“In this absurd world, if there is no love that lasts a lifetime, no unforgettable love, then what is the point of our lives?”

“There are always people who come up with all kinds of weird ways to propose marriage, but what could be better than me proposing to you in a smaller prison while I am in a bigger prison,” he wrote, in a reference to the constant restriction and surveillance of his daily life by state security police he experiences in mainland China.

“There is also anger towards the accomplices of the totalitarian machine that is persecuting you,” he wrote.

“When your ancestors escaped from behind the iron curtain [mainland China] and came to Hong Kong, they never imagined their own descendants would … stoop this low, becoming executioners for the regime for their own self-interest … and abandoning the freedom they had pursued in their lifetimes.”

Ye vowed to remember everyone involved in Chow’s case.

In an earlier letter, Chow speaks about the irony of her fears that Ye would be sent to prison, only to find that she is the first to be incarcerated.

“I remember that when I came to Guangzhou the first time, you pointed out the countless cameras facing your windows and doors, and the police who were surveilling you in particular,” she wrote.

“When we went out to eat, that tall plainclothes policeman sitting at the table next to us kept staring at us,” she said.

“I learned to get used to you being taken away on [vacation] and placed under house arrest on sensitive days,” Chow wrote.

“I learned to prepare myself for the possibility that, one day, you would suddenly disappear into the black hole of China’s judicial system,” she wrote. “That I might not hear from you for two or three years.”

“Just being there for you is enough,” she added.

Later the letter, Chow quipped that the couple — who have already been apart for two-and-a-half years — may need to speed up their plan of ending dictatorship if they are to meet again.

Vision of the future

Ye said he proposed to offer Chow a “vision of the future,” and to bolster the relationship in the face of her incarceration.

“She has received my letter, and has said that she will reply,” he said. “I think there’s a good chance she will say yes.”

He said Chow had been targeted after she chose to speak according to her personal values, rather than keeping quiet to protect herself.

“I will respect that choice,” he said, likening the couple to “paving stones” on the road to democracy.

“I am not worried about her psychological condition,” Ye said. “She is optimistic and strong, but it’s also true that the Hong Kong she lives is isn’t the Hong Kong of the past.”

“I am worried that the message of optimism and persistence she has been sending out has made certain people want to persecute her,” he said.

“I will not forgive anyone who does her wrong,” Ye said. “Liu Xiaobo said that he had no enemies, but for me, anyone who hurts Hang-tung is my enemy.”

Former lawmaker and veteran activist Shiu Ka-chun, who visited Chow in prison on July 24, said she seemed in good spirits, although she didn’t discuss Ye’s proposal with him.