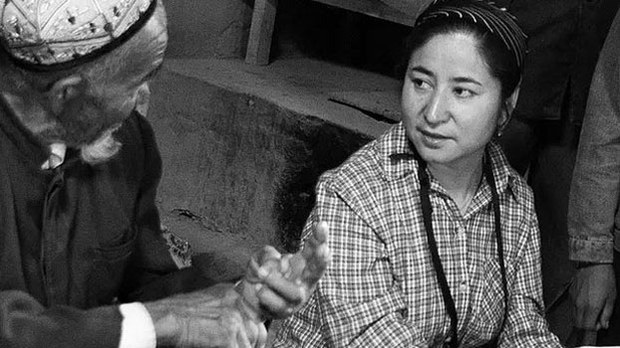 An internationally recognized expert in Uyghur folklore and ethnographer who disappeared in China’s Xinjiang Uyghur Autonomous Region (XUAR) more than three years ago has been confirmed as being imprisoned by authorities, according to her former co-workers at Xinjiang University.

Rahile Dawut, 55, created and directed the university’s Minorities Folklore Research Center and wrote dozens of articles in international journals and a number of books, including studies on Islamic sacred sites in Central Asia, and presented her work at conferences around the world.

An anthropologist by training, she disappeared in December 2017, believed to be arrested and detained in one of the many internment camps in a mass incarceration campaign launched that year by Chinese authorities, who to date have not provided information on her whereabouts or the charges against her.

Rahile was in fact detained along with other members of the Uyghur intellectual and cultural elite, sentenced, and is now in prison, RFA’s Uyghur Service discovered early this month through a series of interviews with employees of Xinjiang University.

Rahile, one of many Uyghur intellectuals silenced by Chinese authorities as part of a campaign to remove influential educators, disappeared suddenly from public life, along with Tashpolat Teyip, Arslan Abdulla, and other prominent professors at Xinijang University in the XUAR’s capital Urumqi (in Chinese, Wulumuqi).

A female staffer in the administrative office at Xinjiang University told RFA that Rahile had been out of work for some time, and that authorities had notified the university that she had been sentenced to prison.

“Yes, they notified us,” she said.

The staffer, who spoke on condition of anonymity due to the sensitivity of the case, also told RFA that the university issued an internal notice to the faculty about Rahile’s sentencing at the end of 2020.

Another official surnamed Zhao from the university’s Department of Propaganda confirmed that Rahile had been arrested but said he could not provide further information.

‘I could no longer be silent’

Akida Polat, Rahile’s daughter who is now based in the United States, told RFA that the last time they spoke in December 2017, her mother told her she was taking a very urgent trip to Beijing for a conference. Akida has not been able to reach her since then.

“The last time I spoke with my mom, talked with her, was December 12, 2017,” she said. “That day, my mom was in a rush and told me she was going to Beijing and she would call me back once she got to Beijing. Then she disappeared without a trace.”

With detentions of Uyghurs widespread in the XUAR at the time, Akida said she felt uneasy about her mother attending a conference but tried to console herself by telling herself that there must have been some kind of misunderstanding. But that exchange was the last she heard from her mother.

“News about them taking Uyghurs into camps had just started to come out at the time, so a week later, after I still hadn’t been able to find any trace of my mom, I got a bit suspicious and wondered whether they had taken her to a camp as well, but I decided to wait a bit,” she said. “One month later, I still hadn’t gotten any news about my mom, and so I felt certain they had detained her.”

China has held up to 1.8 million Uyghurs in a network of detention camps since 2017, with smaller numbers of Kazakhs and Kyrgyz, fellow Turkic-speaking people, also incarcerated in the system. Beijing says the camps are vocational training or re-education centers aimed at combating extremism in the XUAR.

By late 2018, Akida received information that her mother was being held in custody. Realizing that her year of silence on the matter had been useless, Akida decided to go public about the situation in late 2019 when she published a website with information about her mother.

“I learned through acquaintances that they [Chinese authorities] had detained my mom, she said. … In the process of looking for her I had read so many things about Uyghurs in the news and began to sense that we were facing a genocide. In summer 2019, I decided I could no longer be silent and that I would testify about my mother.”

The U.S. State Department, in a report to Congress on Monday, put China on a short list of countries including Myanmar, Ethiopia, Iraq, Syria, and South Sudan that are experiencing atrocities and crimes against humanity, reiterating Washington’s six-month-old determination of genocide in the XUAR.

“Secretary (Antony) Blinken affirmed in January 2021 that the People’s Republic of China is committing genocide and crimes against humanity against Uyghurs, who are predominantly Muslim, and members of other ethnic and religious minority groups in Xinjiang. The crimes against humanity include imprisonment, torture, enforced sterilization, and persecution,” the Elie Wiesel Genocide and Atrocities Prevention Act report stated.

Akida told RFA that her anger about her mother’s imprisonment at the hands of the Chinese government serves as motivation for her advocacy.

“I was so angry when I heard the news about my mother, but the anger made me even stronger. I will never stop [fighting for] my mother’s cause, and I will continue it even stronger,” she said.

In January this year, Akida began working for the U.S.-based Campaign for Uyghurs, a nonprofit organization that advocates for the democratic rights and freedoms of Uyghurs in the XUAR and elsewhere, to further her mother’s cause.

Rahile’s disappearance had been reported by the international media, including The New York Times, The Washington Post, and The Diplomat. Chinese authorities have yet to provide any information to either Akida or concerned members of the international community.