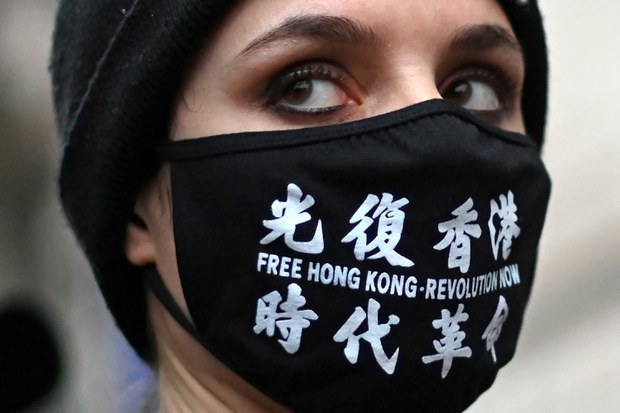 National security police in Hong Kong have frozen the assets of a group that organized vigils for Tiananmen massacre victims, as the city’s public broadcaster was warned on Wednesday that its reporting must ‘safeguard national interests.’

“This morning, the liquidator of the Hong Kong Alliance in Support of Patriotic Democratic Movements of China, Mr. Cheng Yiu-cheong, received a notice from the national security police notifying him that all of the Alliance’s assets, including those of the June 4th Memorial Hall, were frozen,” the Alliance said in a post on its Facebook page on Wednesday.

National security police officers took Cheng Yiu-chang to the June 4th Memorial Hall and handed him the letter of notification, the group said.

“Cheng expressed surprise and disagreement with the [move],” it said, adding that Cheng planned to go to the national security police headquarters to request the assets be unfrozen pending the dissolution of the group.

The Alliance voted to disband at an extraordinary general meeting on Sept. 25, following an investigation by Hong Kong’s national security police under a law imposed on the city by the ruling Chinese Communist Party (CCP) from July 1, 2020.

The Alliance stands accused of acting as the agent of a foreign power, with leaders Chow Hang-tung, Albert Ho, and Lee Cheuk-yan arrested on suspicion of “incitement to subvert state power,” and the group’s assets frozen under the national security law.

At a special general meeting held at the June 4th Memorial Hall under heavy police watch in Mong Kok district, members voted 41-4 to disband after 32 years of supporting victims of the Tiananmen killings, demanding accountability, and advocating for an end to one-party rule.

The national security law ushered in an ongoing and citywide crackdown on all forms of public dissent and political opposition, with election rules changed to ensure only pro-CCP candidates can run and with the government insisting that further legislation on espionage is needed to continue the crackdown on what Beijing insists was an attempt by hostile foreign powers to foment a “color revolution” in Hong Kong.

Government broadcaster RTHK on Wednesday issued a new set of guidelines to its staff, warning them that their work must always serve China’s national interests, on pain of disciplinary action.

Journalists have also been warned to be careful what they say on social media, “to protect the station’s integrity and reputation,” RTHK reported on its English-language news page.

The rules mean that opposition or critical voices are likely to be unwelcome on RTHK programs.

“Under no circumstances should our programs provide a platform to encourage, incite, promote, glorify, endorse, or sympathize with any act or activity endangering national security or otherwise contain any contents which are contrary to the interests of national security,” the station quoted the guidelines as saying.

RTHK programs must not provoke or deepen hatred, discrimination, or hostility towards the central government or the Hong Kong government, the rules say.

Staff must also avoid any contact with foreign governments or political organizations, and should take at face value Beijing’s territorial claim on the democratic island of Taiwan, which has never been ruled by the CCP, nor formed part of the People’s Republic of China.

In an apparent reference to reporting linked to the 2019 protest movement, staff must make sure they don’t sympathize with, justify or glamorize “criminal acts.”

The warnings came as a former protester stood trial under the national security law in Hong Kong’s District Court, for “inciting secession.”

Ma Chun-man, known by his nickname Captain America 2.0, is accused of inciting others to commit secession by shouting “Hong Kong independence is the only solution,” and “Free Hong Kong, revolution now!” at protests and in shopping malls between August and November 2020.

Motorcyclist Tong Ying-kit was jailed for nine years in July for “inciting secession” and “terrorism” after he flew a flag with the “Free Hong Kong, revolution now!” slogan while riding his bike at a protest against the national security law on July 1, 2020, the day it took effect.

National security police have also charged seven other people including a 16-year-old with “conspiracy to incite the commission by other persons of the offence of subversion.”

The group, aged 16-25, are members of the pro-independence group Returning Valiant, and were arrested in July on suspicion of terrorism and amid allegations of a bomb plot.