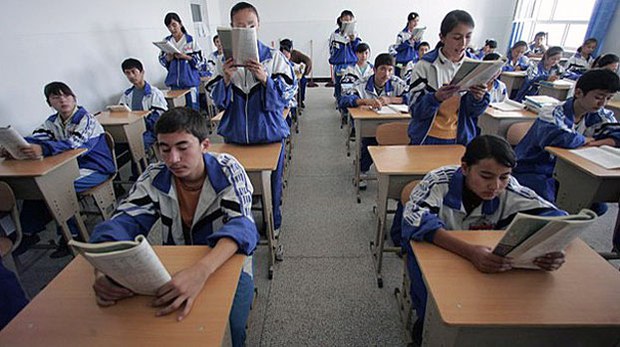 New information has come to light about the death of a principal and the jailing of six teachers at a Uyghur-language school arrested by authorities in 2017 amid a deepening crackdown on Uyghur education, culture, and language in China’s Xinjiang Uyghur Autonomous Region (XUAR).

The No. 5 Intermediate School in Altay (in Chinese, Aletai), the only school in the city where the Uyghur language was the medium of instruction, became a starting place for some of the earliest detentions in that city during the first half of 2017.

In less than three months, local police said to be working with national security authorities had detained seven educators from the high school, taking them away as they wore black hoods over their heads.

The detainees included school principal Rayhan Amat, who later died during interrogation at one of the many internment camps China set up beginning in 2017 that are believed to have housed 1.8 million Uyghurs and other Muslims, according to sources from the region.

The seven educators — including geography teacher Rayhan Musa, Russian language teacher Akbar, and computer science teacher Alim — disappeared one after the other in 2017, according to a source with knowledge of the situation in Altay who spoke with RFA last week.

Other staff members and students at the school did not know why police had detained Rayhan or the other six teachers or where they had been taken.

“All [six] of them were detained along with their husbands and wives, after which they all completely disappeared without a trace,” said Muhtar Abdurahman, a Uyghur researcher who lives in Japan who obtained information about the educators from acquaintances in Altay.

By July of that year, the Public Security Bureau in Altay informed school leadership that Rayhan had been arrested on charges of “opposing national language education” and “attempting to divide the country,” and that she had died.

“National language education” refers to Mandarin Chinese language instruction, though Uyghurs say it has become code for extreme and overtly assimilationist “patriotic” language and school policies in the XUAR since 2016-2017.

The Bureau of Education in Altay city declined to comment on the principal’s situation when contacted by RFA, though the official who answered the phone call did not deny that seven teachers from the school had been detained.

When authorities cancelled instruction in the Uyghur language at the school, Rayhan complained that the sudden implementation of the new policy would undermine teaching at the school, Muhtar said.

Her objection to the policy was used as the basis for accusations by authorities that she was a separatist who attempted to “divide the country,” he said. The six other school employees detained along with Rayhan had expressed support for her objection.

“Rayhan Amat apparently expressed dissatisfaction with the implementation of so-called bilingual education, and for this reason, the Chinese government detained her and locked her up in a camp at some point in 2017,” Muhtar said. “News of her death spread only several months later. Her death in interrogation was confirmed, and her corpse was sent out [of the camp].”

Authorities handed over Rayhan’s body to her family two months after her detention, according to the source with knowledge of the situation in Altay, who requested anonymity for safety reasons.

Because Rayhan’s body was buried under local police surveillance, she was not “sent off” in accordance with Muslim religious and cultural norms that undergird death and mourning in Uyghur society, the source said. Rayhan’s family as well as her gravesite remained under police surveillance for a month following the burial.

When contacted by RFA, relevant officials in Altay refused to answer questions about the latest news on the seven educators, saying that the cases were very sensitive. Only one of them confirmed that Rayhan had died in detention, but declined to provide further details.

Rayhan made a lasting impression on students and colleagues at the No. 5 Intermediate School in Altay — her alma mater — with her loud voice, decisive temperament, and experience in school management, the source said. She was also known as a relentless researcher who exercised every morning.

They doubted that the principal, who was 50 at the time of her death, had died of a heart attack as authorities said, and suggested that she died of torture while in the camp.

Of the remaining six educators arrested in the first half of 2017, one was sentenced to life in prison and two others received 17-year prison terms, sources in the region said. Three family members of the imprisoned teachers also were sentenced to 17 years in jail.

All six of them were sentenced to long terms without trial for supporting Rayhan’s protestation of the bilingual education policy they were told by education authorities to implement, said the source who requested anonymity.

Russian language teacher Akbar and computer teacher Alim were sentenced to 17 years in prison, while geography instructor Rayhan Musa was sentenced to life in prison not only for supporting the principal’s objection to the new policy, but also for alleged religious extremism because she encouraged her husband to stop drinking alcohol, Muhtar Abdurahman said.

Authorities sentenced Rayhan Musa’s husband, Akbar, to 17 years in prison for giving up alcohol as well as for praying, he added.

“As for Rayhan Musa herself, she was sentenced to life in prison,” Muhtar said. “It has been made known that her husband was given 17 years in prison.”

One of the officials in Altay contacted by RFA declined to comment on the sentencings of the teachers, but a city police officer confirmed the verdicts of the three educators.

Muhtar also told RFA that he learned that Obulqasim Yasin, a businessman and the brother of computer teacher Alim, and Halmurat, Alim’s cousin who was the imam of the Dongbazar mosque, also were sentenced to 17-year prison terms.

“I learned concrete details about their situations from a close friend,” he told RFA. “Both of them [Akbar ad Alim] were core teachers at the school, where they had studied as high schoolers. Verdicts showing that they were sentenced to 17 years in prison were produced and provided to their families.”

Authorities have targeted high schools and other educational institutions in the XUAR since the beginning of the mass internment campaign in early 2017, because they are the brains of Uyghur society, Abdureshid Niyaz, an independent Uyghur researcher who is based in Turkey, told RFA last week.

“Education is the most significant means of continuing the traditions of a people, and of [encouraging the] knowledge and preservation of identity,” he said.

Abdureshid surmised that those who received lengthy prison sentences likely did not have proper trials.

During a previous RFA investigation in 2017, a police officer in Peyziwat (Jiashi) county in Kashgar (Kashi) prefecture said that the large number of Uyghur detainees made it impossible to hold trials, and that the detainees were dealt with based upon orders from each county’s politics and law commission.

The police officer also said he had prewritten court verdicts on hand, and that authorities would send people to prison simply by filling their names in the blank spaces on the documents.