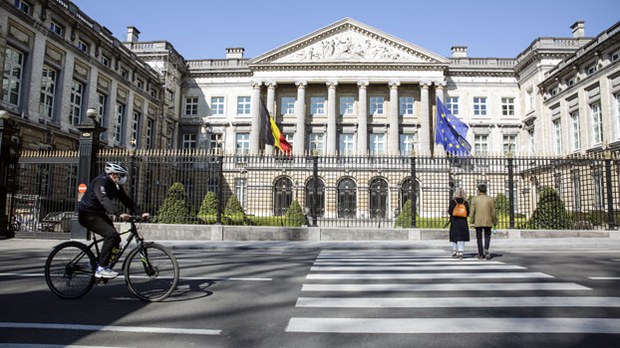 The Belgian parliament on Tuesday recognized China’s treatment of Muslim Uyghurs in the Xinjiang Uyghur Autonomous Region (XUAR) as crimes against humanity and warned of a “serious risk of genocide,” joining other governments and legislatures that have made similar designations.

The vote in Brussels followed the Czech Senate’s 38-0 vote Monday for a motion declaring China’s policies toward Uyghurs and other ethnic and religious minorities as amounting to genocide and crimes against humanity in the Xinjiang region.

The moves by the two legislatures follow those of other democratic parliaments — Canada, the Netherlands, the United Kingdom, and Lithuania — which determined that China’s policies in the XUAR constitute genocide. The U.S. government in January designated abuses in the region as part of a campaign of genocide, and the German parliament is conducting an inquiry into the allegations.

The Belgian motion, which cleared the parliament’s foreign relations committee and will be confirmed by a plenary session on July 1, also calls for a reexamination of policies ranging from extradition to investment.

“Today the Belgian Parliament has raised a warning sign to the world,” said lawmaker Samuel Cogolati, co-author of the resolution and co-chair of the cross-party Inter-Parliamentary Alliance on China.

“There can be no further excuses for inaction,” said Cogolati, who has been sanctioned by China. “There can be no ‘business as usual’ with China while the Uyghur prison camps stay open.”

“Belgium may be a small country, but we can send a clear message to the world that human rights standards should be upheld universally — for all people, everywhere,” he said.

“We cannot stay silent while the Chinese Government carries out the most brutal persecution of Uyghurs, Tibetans and other groups,” Czech Senator Pavel Fischer, who co-chairs the Inter-Parliamentary Alliance on China, said in a statement.

The Czech parliament’s motion also called for the government to stage a diplomatic boycott of the Beijing 2022 Winter Olympics, making it the 11th country to bring forward a parliamentary initiative concerning the Olympic Games.

The other countries that have introduced legislative initiatives are Lithuania, Denmark, Sweden, Switzerland, Italy, Canada, Germany, the EU, the UK, and the U.S.

“I hope that all democratic states will use the Beijing Winter Olympics to signal the strength of our horror at what is taking place in the Uyghur and Tibetan Regions,” Fischer said.

“This isn’t about petty politics,” he said. “This is about preventing an industrial scale atrocity. Any political leaders that accept invitations to the games risk tacitly condoning these abuses.”

There were no immediate reactions to the measures on the websites of the Chinese embassies in Belgium and the Czech Republic, or by China’s Foreign Ministry in Beijing.

‘We are gaining momentum’

Uyghur rights groups welcomed the moves by the two parliaments.

“The decision of the Belgian Parliament to recognize the serious risk of a genocide of the Uyghurs is another important step towards widespread recognition of the Uyghur genocide,” Dolkun Isa, president of the World Uyghur Congress, said in a statement.

“It is imperative that other countries in the European Union, as well as the EU institutions themselves, follow suit and take a firm stance against China’s atrocities and recognize them for what they are: a genocide,” he said.

Omer Kanat, executive director of the Uyghur Human Rights Project, thanked the Czechs and Belgians for standing up.

“We are gaining momentum,” he said. “Seven countries have now recognized the Chinese government’s destruction of the Uyghur people as atrocity crimes.”

The Campaign for Uyghurs (CFU) also applauded the Czech Senate’s unanimous passage of the motion declaring the Chinese regime’s actions as a genocide.

“This is a clear sign of shifting tides against the CCP’s [Chinese Communist Party’s] authoritarianism and a recognition that the regime has been allowed to operate with impunity for too long,” CFU founder and executive director Rushan Abbas said in a statement.

Abbas also urged the international community to boycott the Beijing 2022 Olympics and for more Western governments to recognize the atrocities taking place against the Uyghurs.

Also on Monday, U.N. human rights experts expressed alarm over reports of alleged human organ harvesting targeting minorities in China, including Uyghurs, other Muslims, and members of other persecuted minority groups, while they are in detention.

The experts said they had received credible information that the detainees may be forcibly subjected to blood tests and organ examinations without their informed consent, while other prisoners are not required to undergo such examinations. They also said that the results are reportedly registered in a database of living organ sources that facilitates organ allocation.

“Forced organ harvesting in China appears to be targeting specific ethnic, linguistic, or religious minorities held in detention, often without being explained the reasons for arrest or given arrest warrants, at different locations,” the experts said in a statement. “We are deeply concerned by reports of discriminatory treatment of the prisoners or detainees based on their ethnicity and religion or belief.”

Following the G7 summit in the UK on Sunday, leaders issued a joint statement calling on China “to respect human rights and fundamental freedoms, especially in relation to Xinjiang.”

Chinese authorities have conducted a campaign of mass incarceration in the XUAR since 2017 during which an estimated 1.8 million Uyghurs and other Muslim minorities have been locked up in a vast network of internment camps.

Beijing says the facilities are residential training centers or re-education camps that provide vocational training for Uyghurs, discourage radicalization, and help protect the country from terrorism.