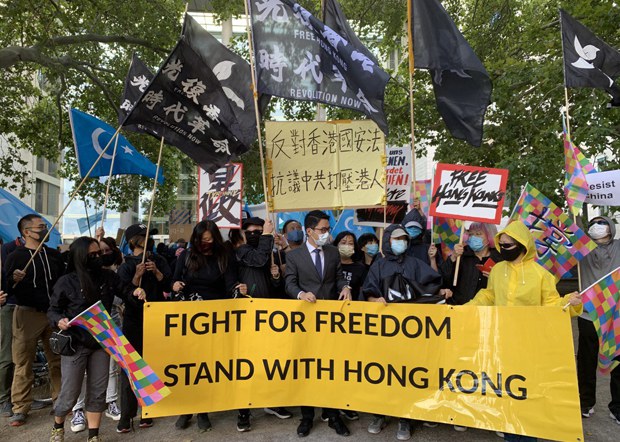 Hong Kong and Chinese officials are engaging in sweeping curbs on dissent and political opposition, a U.K. government report said this week, as European Union officials joined a chorus of international criticism over a draconian national security law.

Over the past six months, the Chinese Communist Party (CCP) has moved to “crush dissent and suppress the expression of alternative political views in Hong Kong,” a six-monthly report from the Foreign and Commonwealth Office (FCO) said.

“China has broken its legal obligations by undermining Hong Kong’s high degree of autonomy, rights and freedoms,” the report found.

It said a draconian national security law imposed on the city by Beijing from July 1, 2020 is being used “to … deter freedom of expression and legitimate political debate.”

Those who fall foul of the law’s loosely defined provisions could face lengthy jail terms, as well as the transfer of some cases to mainland China for prosecution and sentencing, it said, citing the prosecution of 47 democracy activists and former opposition lawmakers on “subversion” charges after they took part in a democratic primary ahead of the Legislative Council (LegCo) election in July 2020.

Sweeping electoral changes were also imposed by the National People’s Congress (NPC), which the FCO said “reverses China’s promise to Hong Kong … of gradual progress towards a system of universal suffrage, and further hollows out the Legislative Council.”

It also hit out at the negative effect of the national security law on media freedom.

The European Union added its voice to the U.K.’s criticism with a statement on June 9, drawing Beijing’s ire at what it termed interference in China’s internal affairs.