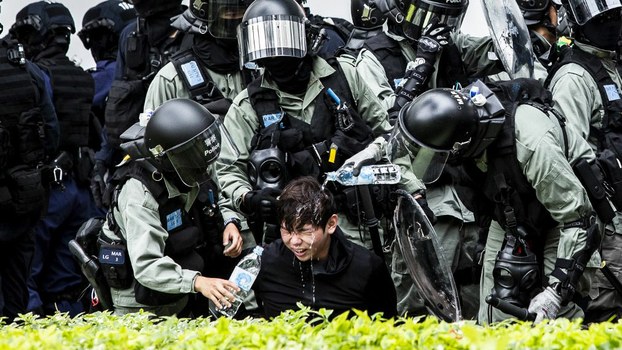 Hong Kong’s police supervisory body on Thursday quashed a long-awaited report into the handling of the pro-democracy and anti-extradition protests, as the city’s leader says there has been no police brutality in recent months.

The Independent Police Complaints Council (IPCC) — which has been criticized by its own experts, rights groups and protesters as a toothless body that relies on the police investigating themselves — said it has indefinitely postponed the release of its report amid growing international criticism of police violence against protesters.

It said the reason for the decision was an ongoing judicial review questioning its right to initiate such an inquiry.

“The IPCC very much regrets that in light of the [judicial review], it would not be appropriate to publish the first interim report as planned,” the agency said in a statement.

A limited report will be issued covering initial protests on June 9, June 12 and the storming of the Legislative Council (LegCo) by protesters on July 1, but ignoring the police’s delayed response to an attack on Yuen Long subway passengers by a mob in white T-shirts on July 21.

The announcement came a month after an international panel of law enforcement experts stepped down from the probe, saying the city’s police complaints body has no power to gather evidence or compel witnesses.

The Independent Expert Panel, which was invited by the government in September to “provide international experience and advice” to the IPCC, said its attempts to negotiate stronger powers for the body had come to nothing in the past month, and the experts no longer wished to be associated with the probe.

The panel had been chaired by Sir Dennis O’Connor, who was tasked by the British government to write a report on the police after the 2011 London riots and included current or former police watchdog chiefs from Canada, Australia, and New Zealand and a British specialist on crowd behavior.

Around one third of adults in Hong Kong have reported symptoms of post-traumatic stress disorder (PTSD) since the protest movement escalated last June, according to a mental health survey published in The Lancet this month, which said the incidence of psychiatric problems was similar to those usually associated with war zones or terrorist attacks.

Rights groups have warned that Hong Kong is now in a state of humanitarian crisis after police fired more than 16,000 rounds of tear gas in recent months, with around 1,000 of those fired into the Chinese University of Hong Kong (CUHK) campus during a single day in November.

Frontline protesters, eyewitnesses, journalists and human rights groups have repeatedly said that the majority of violence during the protests has originated with the Hong Kong police, who have been widely criticized for the excessive use of tear gas, water cannon, pepper spray, as well as both non-lethal and live ammunition weapons on unarmed protesters.

The Lancet has also published concerns over the handcuffing and arrests of voluntary medical staff, including nurses and doctors, during the siege of the Polytechnic University by riot police in December 2019.

But Hong Kong chief executive Carrie Lam told lawmakers on Thursday that there had been no police brutality during the past seven months.

“I believe that the purpose is to weaken the police’s ability to enforce the law. Who would most want to see that? A law-breaker, of course,” she said, as pro-democracy lawmakers shouted slogans, calling on Lam to resign or accede to the protest movement’s five demands.

LegCo president Andrew Leung ordered Claudia Mo, Alvin Yeung and Ted Hui to leave the chamber after they shouted slogans and waved placards during the question and answer session with Lam.

“I don’t think that we can accept this [claim of] police brutality you are talking about,” Tang said. “The only reason we come out to enforce the law is because rioters commit illegal acts or acts of violence.”

Tang said police were now considering whether they had been “misled” after a woman reported being gang-raped inside Tsuen Wan police station. Multiple reports of sexual assault in police custody have emerged from male and female protesters since protests escalated in June 2019.

Tang also dismissed a widely held belief that someone died during an assault by riot police on Prince Edward MTR station on Aug. 31, saying it was “fake news.”

Ivan Choy, senior politics lecturer at the Chinese University of Hong Kong (CUHK), said the government is unlikely to change its tune because it is singing from the ruling Chinese Communist Party’s hymn sheet.

“There’s not much new in any of the government’s statements: they all take a hard line in denying police violence and denying that everyone has lost faith in one country, two systems,” Choy said, in a reference to the framework under which Hong Kong was supposed to maintain its existing freedoms and judicial independence after the 1997 handover to China.

“I don’t see the standoff between the people, this government and the central government in Beijing resolving itself any time soon,” he said. “The anti-extradition movement may be taking something of a breather, but if their grievances aren’t resolved, then it will only give rise to long-term problems, including a total loss of trust in the system.”

“As soon as there is a new spark in the powder keg, we will see another mass movement taking off — possibly involving violence,” Choy said.

A recent opinion poll by Reuters found that most of Hong Kong’s residents support the five demands of the protest movement, with more than one third of respondents saying they had attended a protest.

Only 30 percent said they were opposed, compared with 59 percent of those polled who supported the movement.

The study authors said that the actual mental health impact may be even broader, however, as their study didn’t include the under-18 age group, many of whom have been involved in frontline protests.

Plans by Lam to allow the extradition of alleged criminal suspects to face trial in mainland China sparked mass street protests, soon followed by widespread public anger at police use of force against peaceful demonstrators and demands for fully democratic elections.

Lam has since formally withdrawn the hated amendments to the city’s extradition laws, but has stopped short of meeting protesters’ demands for an amnesty for arrestees, an independent public inquiry into police violence and abuse of power, an end to the description of protesters as “rioters,” and fully democratic elections.