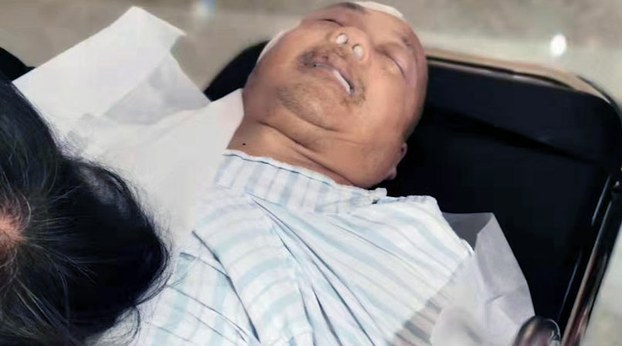 The wife of a petitioner from the southeastern Chinese province of Fujian says that her husband’s death in police custody was suspicious, and has called on provincial authorities to investigate.

Ye Mulan’s husband Chen Chunzhang was detained last August by “interceptors,” enforcement agents sent by local governments to detain petitioners who have traveled to higher-ranking cities or to Beijing to complain about them.

Chen was taken away in Beijing by interceptors from Qingkou township in Fujian’s Minhou county, escorted back to his hometown, and locked up in the police-run Minhou County Detention Center, Ye told RFA.

Then, on Oct. 26, Ye got a phone call from the local police station telling her to hurry to the emergency room at a nearby hospital.

When she got there, Chen was still alive but unconscious, possibly in a coma.

The family asked to check to see if he had any external signs of injury, but police prevented them from seeing him up close.

“He was totally immobile, and I said I wanted to check him for external injuries, but they wouldn’t let me,” Ye said. “I’m pretty sure this was something to do with them trying to force a criminal confession from him.”

“I hired a lawyer, who went and met with my husband on Oct. 23, and then suddenly, just a few days later, he’s like this?” she said.

Chen told the lawyer that he had made four statements to police so far, but that he had refused to plead guilty to the charges against him.

“I asked him back then whether they had tried to force a criminal confession from him, and his lips just trembled and his tears came falling down,” Ye said. “He just wept, and couldn’t talk about it.”

Chen died on Nov. 6 after undergoing emergency brain surgery. The hospital said he had died of a cerebral infarction.

“My husband suffered from heart disease and hypertension, and he wasn’t an appropriate candidate for holding in a detention center, according to the Detention Center Law,” Ye said.

“Also, I want to know what medication they gave Chen Chunzhang. Did he take the medication that he took with him, or did the doctors give him medication to take?”

“If it was Chen Chunzhang taking it himself, then I call on the authorities to release the video footage of him taking it,” she said.

Ye said she had planned to lodge a formal complaint over her husband’s death with the Fujian provincial government, but she is now being targeted herself by the authorities.

“This morning some people who said they were special police and county government officials came to my door,” she said. “They even had manacles with them.”

“I told them they had to show some kind of documentation, but they said they didn’t bring it with them,” Ye said. “They told me they would take me away by force if I went to the provincial government today.”

An anonymous source said Chen’s case was typical of the way that the local government persecutes petitioners.

“First they hold them under administrative detention, then immediately that changes to criminal detention,” the source said. “They are so afraid of complaints to a higher level of government.”

“Some police officers have even said to petitioners: ‘If we resolve your complaint, then what if other people copy you and lodge complaints too?'”

China’s army of petitioners, who flood the ruling Chinese Communist Party’s official complaints departments daily, frequently report being held in unofficial “black jails,” beaten, or otherwise harassed, if they persist in a complaint beyond its initial rejection at the local level.

They are often escorted home forcibly by “interceptors” sent by their local governments to prevent negative reports from reaching the ears of higher authorities.

They then face surveillance, harassment and possible detention on criminal charges.