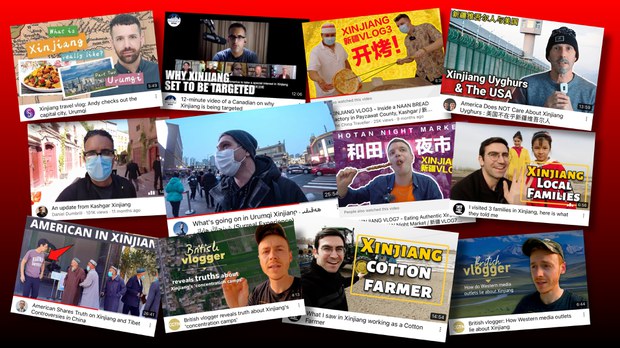 China has enlisted some fresh faces in its pushback against charges it is committing genocide against the Uyghurs in Xinjiang: young foreign social media influencers who produce short videos showing happy minorities in the far-western region.

Travel videos recorded by video bloggers known as vloggers are carried on platforms such as Twitter that are banned in China and spread by state media and affiliated sites. The echo and amplify Beijing’s massive propaganda effort to depict Uyghurs as content with and grateful for Chinese rule.

The videos show “foreign travelers” interviewing people in factories in Xinjiang, with captions such as “Friends, it’s a lie that there is a genocide of the Uyghurs.” “Everything is normal here,” and “Is there a single piece of evidence that there are more than 1 million people in concentration camps?”

“What happens is you’ll have a state media like CGTN or CRI or iChongqing or any number of organizations which are run by the Chinese government — which are the Chinese government — and what they will do is they will pay for the flights, pay for the accommodation, organize the trip, and liaise with the content creator and invite them to go on these trips,” said YouTuber Winston Sterzel from South Africa, who lived in Shenzhen for 14 years

Minders working as translators or fixers are always present to make sure the content creators follow the script, he said.

Vloggers, who post short videos on their personal websites or social media account on platforms like YouTube, say that local government officials arrange their travel and logging during trips they are hired for to make videos that put China in a good light.

“They arrange our travel, and they pay for our lodging and food,” said YouTuber Lee Barrett in a video he recorded.

that China’s consulate general in New York signed a U.S. $300 million contract with U.S.-based Vippi Media in New Jersey to create a social media campaign promoting positive messaging about China TikTok, Instagram, and Twitch as a lead-up to the 2022 Olympic Games in Beijing.

Social media influencers were asked to produce content for their target audiences on Chinese culture, positive diplomatic relations between China and the U.S., and consulate general news.

On the YouTube channel “Two Brothers,” Netherlands-based Tarekk Habib and Anas Habib, both of Egyptian descent, published a video on Dec. 31, 2021, in which they say a Chinese company agreed to pay them U.S. $1,000 to produce and share a video extoling the government’s measures to prevent the spread of the COVID-19 virus at the Olympics and to ensure the safety of athletes.

They said they turned down the request and instead produced a video discussing China’s oppression of Uyghur Muslims.

Since 2017, about 1.8 million Uyghurs and other Turkic peoples are believed to have been incarcerated a vast network of internment camps in Xinjiang.

The U.S. and a handful of European countries have labelled these practices genocide, while China has angrily rejected criticism and maintains the camps are vocational training centers designed to combat religious extremism and terrorism.

In fall 2021, the Xinjiang Uyghur Autonomous Region (XUAR) government began an initiative to mobilize foreign students in China to praise “Xinjiang policy.” The effort was part of the central government’s larger plan to portray ethnic minorities in Xinjiang as happy and content, according to an article in Xinjiang Daily.

Under the title “The people of all ethnic groups in Xinjiang are living happily and joyfully,” the report cited a series of letters written by Chinese Communist Party General Secretary Xi Jinping in which he called on foreign students in July 2021 to increase their understanding of the “real China,” so that their knowledge would inspire others to understand the country as well.

The XUAR government in October 2021 sponsored a trip to Xinjiang for students from 16 countries, including Bangladesh, Afghanistan, Burundi, Uganda, Russia, Pakistan, Korea, Mongolia, Sri Lanka, the U.S. and the U.K.

“They are not only able to look after the young and old people in their homes, they can also earn a salary. Their work environment is very good, and they are truly happy,” an Armenian student was quoted as saying.

Workshops launched at the end of last year now order local administrators to conduct business only in Chinese, telling them they must support language policies mandated by Beijing and lead the Tibetan public “by example,” according to a source living in Tibet.

Uyghur survivors of China’s internment camps began a weeklong rally outside the United Nations compound in Geneva on Monday, seeking a meeting with the U.N. human rights chief and urging her to issue an overdue report detailing rights abuses in Xinjiang.

Dilmurat Abdurehim has been missing since the Eid al-Fitr Muslim religious holiday on May 13, 2021, that marked the end of the holy month of Ramadan. He left his home in the city’s Dongmehelle area but never returned, said a source with knowledge of the situation who requested anonymity for security reasons.